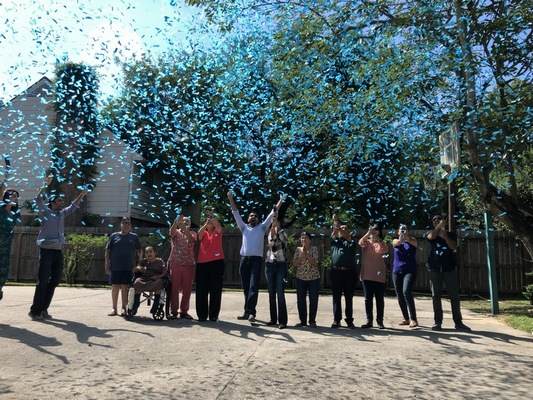 Lidia’s sister is having a baby. She wants to have a party to announce the new baby’s sex. Lidia is the only one who knows the big secret.

She ordered 20 gender reveal cannons with light blue confetti. The free shipping was great. The cannons arrive fully loaded and ready to go. There are no markings on the outside showing what color confetti was inside.

The party was in full swing. Lidia passed out the confetti poppers. The music was pumping and her sister was jumping up and down with excitement. Everyone started counting.

Then with a twist of the hand, the confetti burst into the air. It shot straight up and then began to slowly spread out and fall down on everyone. The suspense is over and everyone knows it's a boy.

How to Use Gender Reveal Cannon

Here's another video from one of our customers. Samantha had a great party for her big . She used several party poppers to get a really fun effect with a burst of blue confetti. Watch her baby reveal video she posted on her blog.

They are very popular. There are many ways to announce the sex of your new baby to all your family and friends. Confetti cannons add excitement for a fun surprise.

A beautiful burst of confetti is a fun way to surprise all your friends and family. A pink or blue burst of confetti will make a moment to remember. But, before you can plan your gender party surprise moment, someone has to find out the sex your new baby.

A lot of parents have the results sealed. When you go to your ultrasound you can talk with the nurse or doctor beforehand. They tell them they do not want to know the sex of the baby. They ask for the results to be written down on a piece of paper and placed into an envelope.

Once you have your results in the envelope give it to a friend or relative. Tell them you are placing an order for confetti cannons for your baby’s reveal. Let them know we will be calling them to ask if it is a boy or girl.

You can place your order online and select the option to “keep it secret”. Then enter the person’s contact information into the box labeled “secret contact info”. We will contact them to find out the sex and load the cannons with the correct color of confetti. Don’t worry, there are no markings on the outside of the cannons to indicate the color.

Fun and Easy to Use

Hold and Twist to Fire

The cannons are ready to go right out of the box. Make sure the cannons are pointed up. The handle with the stripes should be on the bottom.

Be sure to aim straight up when popping. Hold the top part securely and simply twist the bottom. The confetti bursts into the air to announce the gender of your baby.

How far they shoot

Our tissue paper confetti is biodegradable and disappears over time. It breaks down easily when exposed to the elements outside. The time for it to disappear will depend on the wind, sun, and rain. It could be a couple of days or a week or more but it will break down completely.

Do the Cannons Show the Color?

The cannons are completely generic on the outside. The outside is black with many different colors all over. If you order cannons in both colors they will be bagged. There will be a small pink or blue sticker on the outside of the bag. When you know what the sex is you remove the cannons from the bag matching the color for the sex. 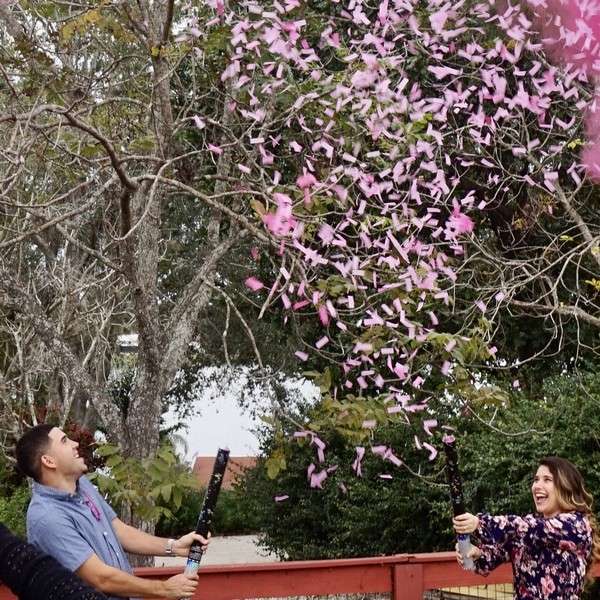 It’s a Girl! Wow, what a fun and exciting way to share the sex of your new baby to everyone. You can imagine the look on the faces of your family and friends!

When with a twist of your wrist you send confetti flying into the air. This effect was created with 2 large cannons with pink confetti.

You already know the big secret. Now it's time for the big surprise with your family and friends. You have kept them waiting in anticipation. You can now send colorful confetti shooting through the air to let them in on the big news!

Check the shipping time for your cannons. All of our items ship from Orlando Florida.

Check the UPS ground shipping map . Then enter zip-code 32810 to determine how many days to your location.

If you want to use other colors for your party you can use disposable confetti cannons. You can select from a variety of colors to match your party theme.

Use confetti cannons but don’t tell anyone about them. Bring them out during the party and just fire them into the air without warning to share the news.

Build the suspense even more by first shooting off a confetti cannon filled with multi-colored confetti. After that, you can shoot off the real cannons with pink or blue.

Confetti is not that hard to clean up. A whisk or straw broom is the best to sweep the confetti into piles and pick it up. If you shoot it outside you can use a rake to make piles or use a shop vac.

When you shoot biodegradable tissue paper it will break down over time.